After a large number of shootings in Chicago over the Fourth of July weekend, Mayor Rahm Emanuel called for a "partnership for peace" and for Chicagoans to take a stand against violence; Emanuel stressed that giving youths alternatives to the street is a key factor in reducing gun violence

Mayor Rahm Emanuel said Wednesday he does not believe potential lawsuits claiming the planned development of the George Lucas museum in Chicago would violate the city’s Lakefront Protection Ordinance would block the project; Mayor said, “We feel very comfortable, from the legal perspective, where we are”

Mayor Rahm Emanuel Wednesday introduced to the City Council an ordinance that would increase city telephone bill surcharges by 56 percent; Measure is designed to help close a $20 billion unfunded liability in the city’s pension systems 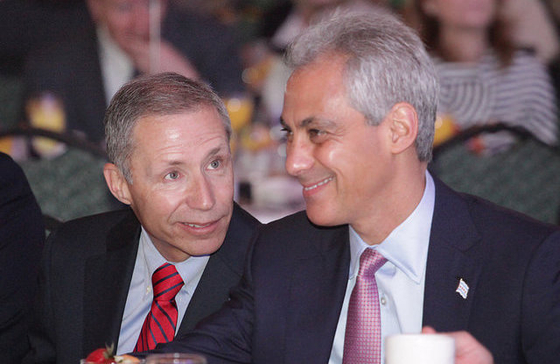 Mayor Rahm Emanuel and several aldermen are expected to introduce at Wednesday’s City Council meeting an ordinance that would prohibit for six months the demolition and conversion of single-room occupancy hotels and residential hotels into high-priced apartments; City leaders hope moratorium will give them time to determine how they will regulate gentrification that has put thousands of very-low-income housing units at risk

Mayor Rahm Emanuel will introduce an ordinance at Wednesday’s City Council meeting that would increase fines for graffiti from $750 to between $1,500 and $2,500; Repeat offenders would be subjected to higher fines

Mayor Rahm Emanuel in a May 25 letter to Marty Nesbitt, head of the Barack Obama Presidential Foundation, called for the Obama Presidential Library and Museum to be developed on Chicago’s South Side; Emanuel wrote, “I believe the library should be housed on the South Side not only because that is where the president began his career and built a home for his family, but because that is where the economic, job creation and social impact of the library will be the greatest”

Source told Crain’s Chicago Business the newfound working relationship between Mayor Rahm Emanuel and city Inspector General Joe Ferguson is “right where it needs to be,” adding, “A mayor and his inspector general shouldn’t be picnicking in the park together and reading each other poetry”; Ferguson, who had planned to resign after bringing the city into compliance with the Shakman decree, this week announced he plans so stay on